This desk is stamped Holland & Sons and bears marks of the royal house during the period of George IV and queen Victoria.

Holland & Sons started as the cabinet makers and upholsterers called Taprell and Holland, by 1843 they changed their name to Holland and Sons with William Holland, a relative of the Regency architect Henry Holland. In 1851 the firm employed over 350 men and in 1852 it incorporated the prestigious firm of Thomas Dowbiggin (1788-1854) of 23 Mount street and took over its Mount Street premises in London. The firm Thomas Dowbiggin had made the state throne for Victoria’s Coronation. Holland and Sons also worked successfully as undertakers and were responsible for the dke of Wellington’s funeral.

Under Wlliam Holland the firm became cabinetmakers and upholsters to the Queen, their first commission was for Osborne House in 1845, supplying furniture in the Queen’s favored Louis XVI style. They continued to supply furniture for Osborne and gained further commissions for Windsor Castle, Balmoral and Marlborough House.

Holland and sons also worked for many leading institutions including the reform Club, the British Museum, Athenaeum Clubs and the Royal Academy. Along with Gillows they shared the commission for the new Houses of Parliament. They were part of many of the important international Exhibitions including London in 1862, Vienna in 1873 and Paris in 1867 and 1872.  The firm remained under family control until it closed in 1942. 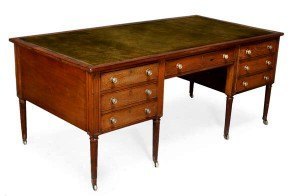 Anticuarium has lately also acquired other important pieces such as a magificent writing desk by Gillows, contemporaries and collaborators of Holland & Sons, which desk has just been sold to a Spanish client.

It is not the first time that Anticuarium acquires pieces that have belonged to the British Royal family, such as the Biedermeier commode that was acquired from the Prince Vladimirovitch family that previously belonged and was fire stamped by the Queen Mary royal court. 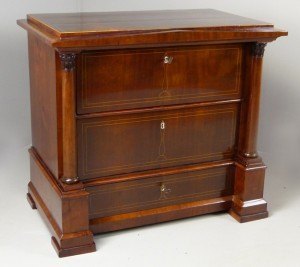 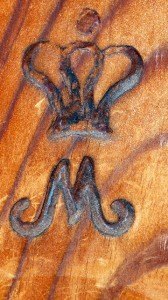